Just yesterday my son said “but I want Ruben to be English and Italian like me, and to speak English..” after commenting that my 16 month old says ‘mamma’ and not mummy yet. I told him how most babies start off saying mama and then go on to say ‘mummy’ just as he did. He seemed semi-satisfied with the answer. I realised he was clinging to his sense of identity and how he wanted to have someone else in the same boat as him. His little brother is in the same situation as him and so obviously he wants him to speak the same way he does.

At the moment my 16-month-old son doesn’t speak, but he understands everything in both languages. He has started to express other words such as “pappa” and “again” but only at odd intervals.

You’re also probably wondering what language siblings would speak to each other in a bilingual family setting. As much as you may like to choose, the children are the ultimate deciders of this quandary.

There are many factors at work to determine choice of language between bilingual siblings. 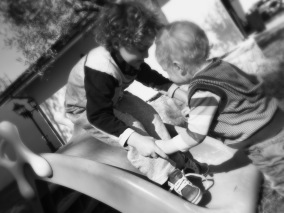 In many bilingual families the children decide to switch languages depending on the situation. If they are with a group of children who are talking in X language, they will switch to X language. They can use the advantage they have of being bilingual, and adapt with ease into different circumstances.

In any case, the first few years of your child’s life are crucial to their development in both languages. The more exposure they have of a language, the more they absorb and assimilate and the more proficient they will become. The language they choose to speak with a sibling is the reflection of the input they have been given and a language that has been given more love and attention may the one, no matter how ‘minor’ it may be.