You’re at a party and there’s that lovely mama with whom you’re getting on with quite well when you meet at the school gates. She’s there with her daughter. You’re chatting away with her and all of a sudden she decides to say something on the topic to her daughter.. but she does so in Russian. You look bemused for a moment as you don’t know exactly what was said. The little girl lets out a little giggle and gives you a quick glance before running off to catch up with her friends. The Mum speaks English and so does the girl. But they decided to codify their little language exchange. The Mum didn’t mean to be rude but she’s keeping to her strict OPOL policy.

Sometimes you just need to be able to talk to monolingual friends without feeling the need to switch when talking to your child. It’s not the switching that is the problem but it’s more like the fact that you don’t want to look rude in front of other people by talking in a language they don’t understand. It’s a bit like whispering. When my child speaks the geographical majority language and so do I, I don’t want to have to switch languages just to keep to my OPOL characteristics. I used to do it, but now I don’t and it certainly hasn’t made a difference to our now slightly looser OPOL method.

Many parents complain that they’re afraid of their children losing the ability to speak the target language if they also start speaking to them in the majority language. The trick here is to keep to basic guidelines such as; when alone with the children and when at home, the target language is to be prevalent. Keep rules elastic, nobody learns when they feel pressurized.

I speak both languages fluently. I picked up Italian almost intuitively and studied the grammar by myself. A lot of people make the mistake of thinking that an additional language should be learned completely naturally without turning to a mother tongue language for translations or help, that it should be just ‘picked up’ and learned. After years of teaching English as a second language to children where school methods only allow you to speak in the mother tongue, I’m finding there can be lots of flaws in this methodology. Children learn a lot quicker if you tell them first in their language and then you teach them what it is in English, this way they also have a quick memory short cut perfect for translations. When I’m interpreting I sometimes have difficulty doing a quick translation because of this way I learned the language. Not because I don’t know the translation but because it takes me a while to think of a good way to express it in the other language having learned both languages intuitively without hardly ever translating them. It is a lot more resourceful for children to learn being able to also use their first language for a direct translation. It will stand them in good stead for future encounters. I’ve found that this is also what happens when we use a strict OPOL method, when one person is only allowed to speak the one language. We don’t allow intrusion from other languages so we don’t allow them to ‘cooperate’ with each other in our minds therefore losing many possibilities to aid communication and create shortcuts; it can actually be quite limiting.

Crawling out of the tunnel

I made the mistake of doing extreme OPOL with my first son and I notice that sometimes he can’t make a direct comparison in the other language because I banned the other language completely. Now with my second son I’m speaking in English to him but I also express the same thing in Italian too, so he gets the hang of the two languages and hopefully can translate quicker. He knows that he’ll have to converse with me in English but there won’t be any strict OPOL rules about there not being allowed other languages.

OPOL is listed as one of the most effective ways of raising bilingual children. I’m certain though, that as long as there is language exposure and consistency that just doing what works for the family is the best way to raise bilingual children. 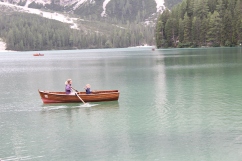